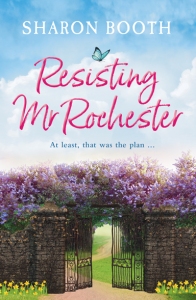 I know it’s a crazy thing to do. Take a much-loved work of literature, beloved by millions—not least yourself—and use it as a springboard for a new book. And a romcom at that!

Then again, when have writers ever pretended to be sane? You have to have a little bit of madness, or how are you going to live all those lives? Inhabit all those characters? Sometimes, you just have to feel the fear and do it anyway…

So, why did I write this book? Well, the title came to me first. It sprang into my mind one day, and just refused to budge. That’s unusual for me. Highly unusual. It’s only happened to me three times, and all within a single day. I’m currently working on the second novel inspired by a title, and making notes for the third. Usually, though, the title is just about the last thing to come to me.

Once I had the title, the main outline for the story came very quickly. I knew I wanted to write a contemporary romance with humour, and I knew a modern version of Mr Rochester was the hero.  Who, though, would be the heroine?

I considered, briefly, the idea of calling her Jane, or Janie, but dismissed the idea. A search on the meaning of names told me that Jane means “Beloved of God”. I quickly found a name meaning “Beloved”. Cara. I liked that name, so my heroine became Cara. As for her surname…

I wondered where the name Eyre came from, and what it meant. A search online brought this fascinating legend to my attention, and so, Cara Truelove was born.

Having studied Jane Eyre, I was well aware that it’s a mixture of genres: The Bildungsroman (dealing with the formative years of a character); the gothic horror of the madwoman in the attic, the ripped veil, the maniacal laughter; and finally, there’s the romance – the unexpected and overwhelming love between plain, small Jane Eyre, and the wealthy Mr Rochester.

In Resisting Mr Rochester, I’ve tried to combine those same three elements in a humorous way. Cara Truelove reflects back on her childhood, growing up in the shadow of her clever brother Redmond, and pretty sister Tamsin. Her relationships with her siblings have definitely affected her, and have shaped her character. Adding a gothic element was tricky, but I think I managed to add that sense of danger and menace without detracting from the overall light-heartedness of the story. Finally, the love story—my favourite part. Watching the blossoming romance between the insecure Cara and her passionate suitor was great fun and quite emotional. Like Edward Rochester, Ethan wears his heart on his sleeve, and makes no secret of his desire for Cara. But will his real secret drive them apart? And is Cara herself even more of a threat to their happiness?

Jane always struck me as a feminist. She raged against the suppression and forced expectations of behaviour women endured; she loathed the fact that women were supposed to be meek and mild, spending their days in “feminine pursuits” while men were allowed to build careers, have fun, use their minds. Debate and education were not for women. Jane hated that. She knew that women had the same intellectual capacity as men, and that they were being stifled. The frustration of having no choice and no voice must have been torture. Jane Eyre provided a voice for those women. No wonder it was once considered a dangerous book!

Although there is still a long way to go, and the same freedoms do not apply in every culture, many modern women can pursue careers, and can be assured that they will have their voices heard. Cara’s problem, therefore, is different to Jane’s. She has too many choices, and feels she’s failing because she hasn’t got some glittering career. She’s not an academic like her brother, Redmond, and she’s not a yummy mummy like her sister, Tamsin. Where does Cara fit in, in a world that insists that women can, and should, have it all?

Ethan Rochester, on the other hand, does have it all—or so it seems. Like the original Mr Rochester, he is rich and has a large house on the moors, and takes care of a young child. Like Edward, Ethan is married. Unlike Edward, he doesn’t hide the fact. Even so, there is no sign of the mysterious Mrs Rochester, and the marriage hardly seems to be a conventional one…

I knew that, to have a real flavour of Jane Eyre, there had to be some gothic element in there, and so I wove in a storyline of noises in the attic, a housekeeper who seems determined to make sure Cara is never alone, and even a rather alarming incident with a knife and a midnight visitation!

At the heart of this story, though, as in Jane Eyre, is the developing love between two people.  Ethan and Cara meet in the middle of an unexpected cloudburst, and it’s sunshine and storms for the two of them for quite some time!

Resisting Mr Rochester is about finding your place in the world, accepting yourself as you are, and allowing yourself to dream…I hope you enjoy it! 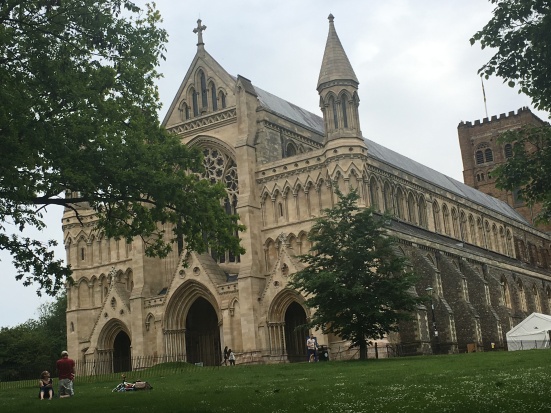 The sun decided to disappear the moment I got out my camera!

The lovely St Albans was the setting for this year’s Verulam Writers’ Get Writing day which, as usual, did not disappoint. There were some names I’d already heard of, the incredibly talented historical fiction writer, Emma Darwin (the great-great-granddaughter of Charles and Emma Darwin) for one. 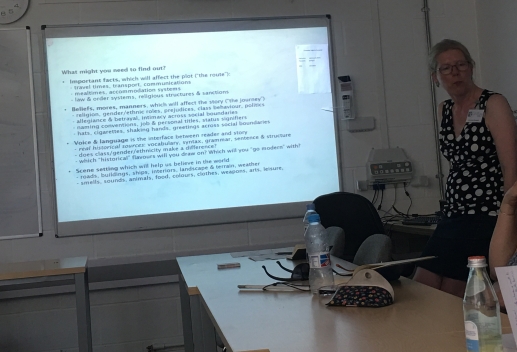 I attended Emma’s two-hour workshop ‘Recreating the Past’ and was introduced to something called “psychic distance” which I confess I’d never heard of before and would probably get totally wrong if I tried to repeat it, so here it is as Emma explains it: http://emmadarwin.typepad.com/thisitchofwriting/psychic-distance-what-it-is-and-how-to-use-it.html.

The fabulously upbeat Lucy V Hay who is a novelist, script editor, screenwriter and blogger of www.bang2write.com discussed loglines and taglines, the three ‘C’s namely, concept, clarity and character, and how to pitch your screen-play or novel. We discovered that there really is something called ‘the saving the cat, scene,’ written to make the audience see the softer side of an actor who is a ‘bad ass.’ It was coined from Ripley in Alien who wouldn’t leave the ship without Jones the cat.  And apparently a ‘fridge woman’ in a film is the name of a woman brought on simply to get her killed. Who knew? 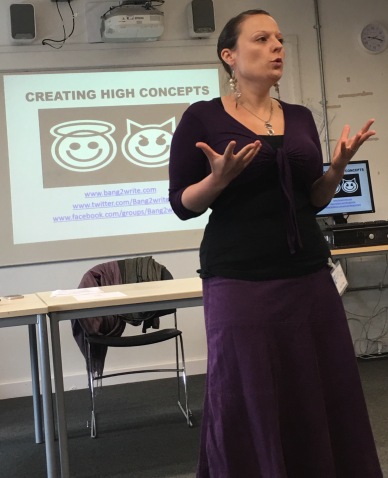 It reminded me of a different Get Writing talk a few years ago when a BBC screenwriter discussed how they decide the ‘duff, duff’ moment, ie: the closing scene when the ‘duff, duff, duff’ music at the end of Eastenders starts to play. Love it!

Cambridge academic Andy Martin amused us with tales of when he sat with Lee Child for seven months watching him write one of his books, drink gallons of coffee and smoke lots of cigarettes. Still not sure why he did it but he produced a book from his experience called, ‘Reacher said Nothing,’ which I think is a great title. 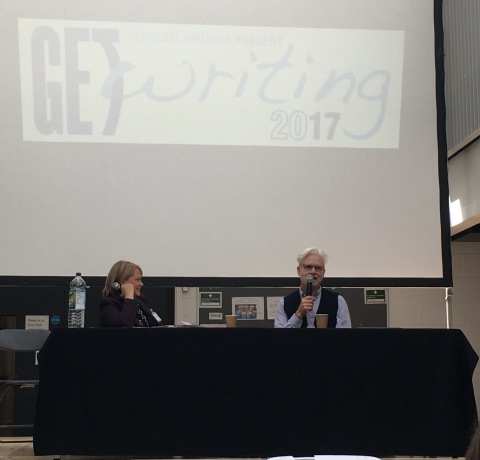 He made an interesting point as to why Lee Child was happy for Tom Cruise to play the part of Jack Reacher in the film, when, in the book, he’s a six foot something bit of a hard man. The reason it seems, was simply that he knew Tom Cruise would be a dead cert to get the film made and that Tom was such a good actor that everyone would forget the height of the original Jack Reacher within five minutes of watching Tom Cruise on the big screen.

The day was rounded off off with a couple of book bloggers who get hundreds of books sent through their door- sounds like heaven, but wow, what a lot of hard work to try and review them all – oh, and their postman hates them!

And just for the ‘aww’ factor here’s a nest with baby coots living on Heron island in St Albans park. (or they might be moorhens – hey, I’m a writer not an ornithologist!) 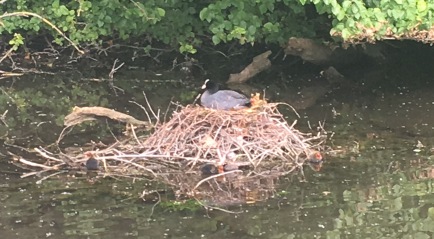 Air Guitar and Caviar out now.