Have you ever wanted to go somewhere so bad, but knew that you never would because you couldn’t afford it or it just wasn’t possible? 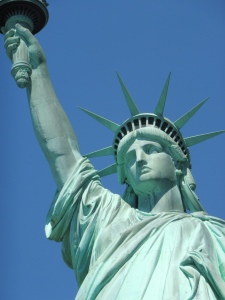 I have since I was a child and learnt about the Statue of Liberty, I longed to go to New York. As I got older it was always in the back of my mind. Thanks to watching Ghostbusters numerous times I felt as if I knew the place pretty well already. I met Steve when I was eighteen and we did go on an amazing holiday to Hawaii, before we settled down. Then we bought a house, got married and our five children came along, so a day out in Blackpool was a luxury that we couldn’t really afford, but we would save up and take them so they never missed out. We did have one holiday abroad when the kids were very small, but it was such hard work that I swore to myself I would never go abroad again. At least not until the kids were old enough that they didn’t need nappies, buggies and more clothes than we could carry. Fast forward to nine years ago and I had five teenagers, we discovered Centreparcs which is perfect for our family, especially my son Jaimea who is severely disabled. We try and go there every year because we love it so much and now I have grandchildren to share it with. Gosh I feel old, however New York it isn’t and I still desperately wanted to go there. Jaimea needs round the clock care and we’ve never left him so before so I knew it wasn’t going to happen. I wasn’t bitter about it because Jaimea is my world, but it’s hard knowing that you can’t do what everyone else is doing.

This year has been a tough one for my family, my two adorable grandsons decided that being born at 27 weeks was fine and Jaimea became seriously ill. He ended up in intensive care for longer than I care to remember. Thankfully he eventually got better and the twins were well enough after one heck of a fight to come home.

I was looking at my emails and found an invite from my publishers Harlequin to a Black & White Ball, to be held at…..you guessed it The Waldorf Astoria in New York. My heart filled with pride that I had even been sent such an invitation, but seconds later it sunk again. I knew I could never go, but being invited was almost as good I told myself. I printed the invitation out and stuck it to the front of my fridge, hoping it would give me some incentive to stick to a healthy eating plan in case I got another invite next year.

Later that day my daughter brought the twins to see me and read the invitation, she looked at me and said, ‘You have to go.’ I laughed and told her I’d very much love to go, but I didn’t even have a passport. She rang the passport office and made appointments for me and Steve to go to Liverpool the next day. We told ourselves we would get the passports then see about booking, the next day after a four hour wait we had our shiny, brand new passports in our hands. Then fellow write romantic Rachael who was also invited asked if I had my ESTA, my what? We drove home and I applied, within a minute we had our approval. I was terrified to book because as much as I wanted to go I was scared to leave Jaimea. We finally talked ourselves into it with the promise that if all was not well on the day we were supposed to travel then we wouldn’t go.

It was eight days until the ball and it was amazing how things fell into place. I even had a brand, new black dress that I’d never worn hanging in my wardrobe. It was as if it was meant to be, so we packed our bags and said our tearful goodbyes. I was only going for three nights but it seemed like forever, we needn’t have worried. Jaimea had the time of his life without us, my kids who are actually all adults now took care of him brilliantly.

When we arrived in New York I got a text telling me Jaimea was fine and to enjoy myself, which quite frankly I did. We packed everything in those three days that I’d ever dreamt about. The Statue of Liberty, The Top of the Rock, The Empire State Building, The American Natural History Museum, The One World Tower, we paid our respects at the 9/11 memorials. We saw Central Park, shopped on Fifth Avenue, visited Times Square – a lot and we would visit the summer bar outside the Rockerfeller Plaza each night and sip cocktails. We went to Grand Central Station, The New York Public Library and of course Cinderella went to the ball at the Waldorf, which was the hotel we were stopping in anyway. The ball was amazing, it was the kind of party I’ve always dreamt about since I was a teenager and as I sat there sipping my champagne I could not believe I was there, in the city that never sleeps. After dreaming about it for more than thirty five years, let me tell you something, it was even more amazing than I’d ever imagined. By the time we flew home we were exhausted, but I’ve never been so thankful or grateful that I was able to go. We arrived home to find our house was still standing, Jaimea was fabulous and I felt as if my spark for life had been reignited after all these years.

The moral of this story is never give up on your dreams, even if you think there is no way on this earth you will achieve them because of the obstacles life puts in your way. If you want something bad enough you will find a way and when you do take the opportunity to have the time of your life.

First of all I would like to say a heartfelt thanks to everyone who has commented and wished me well. No-one is more surprised than me about my offer of a two book deal with Harlequin’s Digital Imprint Carina.  In my heart I know my novel is good enough to be published because over the years I have read some that actually kept me going they were so bad and had found publishers, but I never actually believed it could happen to me. I thought it was something that would always happen to everyone else. I keep thinking it all might be a mistake, once my contract arrives I think I might actually believe it’s true and then I’ll give everyone a full update.

You know there is a garden centre we visit every couple of months up at Ambleside and outside there is a wishing well type thing with a bell that you throw your money at to see if you can hit it. It has become a Phifer family tradition now that none of us can walk away until we hit that bell at least once and make a wish. My wishes these last two years have been, please let me finish my book, please let me find an agent or publisher, please let the lovely editor I met like my book, please let the lovely editor buy my book – you get the idea. I think it might be time for another trip up there to make another wish but I’m not sharing that one unless it comes true but whatever you do with your writing and no matter how disheartened you may feel – don’t ever give up.