How do you do it? The concept of what success means is constantly shifting, not just for writers as a collective, but for each of us as individuals. Even when we achieve what we thought we wanted to achieve, there’s no guarantee it will actually make us *feel* successful. There are always others who seem to be doing better or perhaps doing things differently to us, who will make us question whether we’ve made the right decisions or whether we should be on a different path altogether.

Maybe it’s lots of these things or something else entirely. In the last couple of years, between us, the WRs have achieved more of these measures of success than I think we ever really thought possible. But, lately, I’ve been questioning what it is that would make me feel I’ve been successful as a writer and I happened upon a quote that really resonated with me:

‘Success should be measured by how much joy it gives you.’

For my writing life, this is so true. Whilst I’ve ticked a lot of things off the list above, there are several still to achieve. 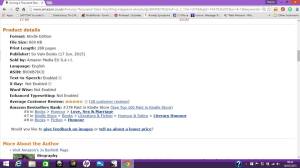 However, I’ve discovered if I approach writing chasing too many of those measures of success, I can rob myself of that joy. I started writing just because I loved it and that’s how I want to measure my success. If my writing gives me joy, then I can’t really ask for more. The rest is all just garnish.

As for my social media presence, that’s probably strongest here, on this blog, with the rest of the WRs. There might be lots of blog awards we could have won with a different approach and there are writing collectives with a higher profile than ours. However, if success really is measured by the amount of joy something brings you, then being part of this blog and, more importantly, this group has also been a resounding success for me.

I’d love to know how other writers measure their success and, whatever form that takes for you, I wish you lots of it.

It’s 15th January which means we’re halfway through the month. There’s a statistic (although I’m way too lazy to Google it right now) around how many people will already have given up on their New Year’s Resolutions by now – particularly the ones around diet and fitness – and it’s a huge proportion of them. So I thought I’d ask the Write Romantics how their resolutions are going. Here’s what some of the group have to say:

I’m a great believer in not setting resolutions that start on 1st or 2nd January as mine are always the same (lose weight and get fit) and I’m afraid there is still a lot of chocolate, crisps and Christmas goodies left in the house at that point. I’ve been trying to get fit for the past year and have joined a beach-based bootcamp which has seen my fitness levels soar. I can’t get any better, though, until I lose some weight. I lost 3 stone but I really relaxed my eating in the autumn and gorged over Christmas so I’ve probably put a stone back on. I need a more controlled approach to my diet but I don’t want to do the extreme approach that my bootcamp recommends so I’m joining Slimming World tomorrow and just hoping I can motivate myself enough to step away from the lard and just go for it.

Writing wise, I didn’t really set any resolutions; just an aim to write more often. I think I may have failed that already as I did some last night but the last bit of writing had been the previous Tuesday. To be fair, I’ve had 2 days away with work but I have also had a few days faffing about with emails and Facebook.

Making resolutions is something I do each year. As is breaking them! So this time I took a different approach and made the resolutions more achievable.

For instance, I bite my nails and have done since I was a toddler. I always make the resolution, stop biting my nails. I always fail. This time it was, try and grow my nails. So far, so good.  I’ve even managed to break one, which is a totally new experience for me.

My other resolutions are, to eat less rubbish and eat healthier. This one didn’t get off to a good start due to the amount of Christmas sweets lingering around the house.

Also to do some writing work each day, whether that is blogging, editing or writing. This one I’m doing really well with.

I didn’t so much set resolutions as lay out a few vagueish plans – I like to play myself into the new year gently!  The writing plans I detailed in an earlier post but basically I have two novels to finish, one of which will go to the NWS, so in that respect my plan is to work harder at the writing, up the daily word count and stop checking emails every five minutes.   Other than that it’s the old chestnut, eat less and move more.  Nothing much has happened on either count as yet but then I haven’t really been trying. I did set out intending on having a long walk but ten minutes on a monsoon started and I nipped on a bus!

I’ve also decided that this year my garden is going to have more colour in it.  I made a start on that before Christmas by turfing out shrubs that had gone woody and cleared some space ready for new stuff so now I’m scouring the gardening columns for ideas while relaxing by the fire, so no effort required there, then!

My writing related New Year’s resolution is to get Beltane submitted. I’ve made the final changes to it and the lovely Julie and Jo are kindly proof reading it for me. I’ve got a list of publishers that I intend to submit to and I’m now researching agents that accept speculative fiction. Next up is writing the covering letter and writing CV.  Any advice on those would be very gratefully received!

As you all know my other New Year’s resolution was to start dating again. Inspired by the advice I got from my blog on Saturday I have now joined an online dating site.  And that’s all I’m going to say about it on here…

With summer in Australia starting in December, January is a difficult month to make any resolutions especially as we were away for the first ten days, on holiday. So, I guess my resolutions started on the 11th of this month! I’m afraid that they are not very original: eating better, continuing regular exercise and procrastinating less with writing. So far, two days in, it’s going well…

I find that with exercise, I can get stuck in a rut, and to keep exercising, I must enjoy myself or it becomes a real chore. So last year I did spin classes, step and Pilates. Don’t worry, I ‘m not an exercise nut, these sessions were scattered throughout the year! I want to do more walking this year but I have to change my route from the usual “near home”, which is around the houses and not all that scenic. I have downloaded some new routes and I will try the first this Wednesday morning before I start writing. The track starts in a suburb near here but goes through a ferny gully near a waterfall and the waters of Sailors Bay. I’m thinking that if the sun is shining and the water glistening, it’ll put a spring in my step and my writing will flow when I get home, so that’ll help with reducing any procrastination. Fingers crossed 🙂

I set a few resolutions for this year.  The first was to read at least four times a week with my little boy and we’ve kept up with that– we’re reading Horrid Henry and the Haunted House at the moment!  I also said I’d exercise at least four times a week, which I’ve just about managed, although it’s been dog walking rather than high impact aerobics in the main…  I wanted to write four times a week, too, but due to my current workload marking university papers and it being one of the key submission points for my students, I’ve had to postpone that resolution until February.  My final resolution was to try to capture some joy in every day, even the most challenging and stressful of them.  To date, I’ve managed to do that and focussed on everything from laughing at an Adam Sandler comedy with the kids to watching the sky turn pink whilst walking my dogs on the beach – so all in all, it’s been a pretty good year so far.

It seems that exercising is a pretty strong theme across the Write Romantics so maybe we can give each other a bit of support and encouragement. I love the images created by Jo’s “joy capturing” and Helen R’s proposed new walk; the joys of living in Australia where it’s sunny at the moment! I’m having a down day so I think I may need to do something to capture the joy. Not sure what, though!

How are you getting on with your resolutions? Do comment and let us know.